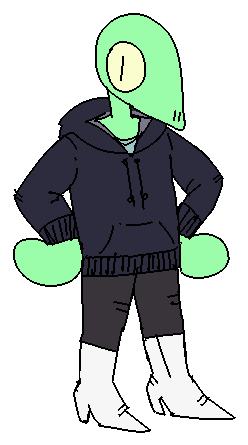 Nobody knows just what Vert is or where they came from. Some say they're a being from space who was sent to this planet as a punishment for their crimes. Others say they're a mad beast that crawled out of the swamps to terrorize the townsfolk.

And then there are also a few folk who believe Vert is just an escaped housepet.

Whatever their origins, Vert is known to do what they want, when they want. A true wildcard, Vert is quick to temper and ready to attack.

Vert is rarely seen without their trademark White Boots, the contents of which is filled with sweet and savory baked beans to give them height and a tasty snack.